Building a Legal Framework for Public Policies on Early Childhood.

Speech by Lisa Jordan – Executive Director Bernard van Leer Foundation – given on April 16th 2013 in Brazil at the opening of The First International Seminar of the Parliamentary Front for Early Childhood on Building a Legal Framework for Public Policies on Early Childhood.

The Bernard van Leer Foundation is very privileged to be sharing in this opening with such an august roster of speakers. Thank you for honouring us in this way. I am going to share a personal story, comment upon young children being the business of parliaments, and how this conference can help close a gap between law and practice.

When I was 22 years old, I took my last university exam, skipped the graduation ceremony, packed a bag, got on a bus and travelled for 3 days straight to Washington D.C. – a place that I had only ever read about. I left my suitcase at a friend’s house and went to the Library of Congress and started to pore over voting records of all of the sitting members of Congress. I made a list of five members who had perfect voting records – from my perspective – and every day for the next three months I would pay a visit to their offices and ask them if they had a job for me. One of them finally took pity on me, or his staff just got tired of seeing me in their front office, and offered me an unpaid internship which I promptly took without thought for how I would afford to eat.

As you know, democracies are made many pillars of government. I believed then as I do now that the most important of these pillars is the legislature. Why? It is definitely not the most glamorous – you rarely get credit and often are reviled as being out of touch – but it is where the fabric of any nation is woven – where the important principles are stitched into law and where an ordinary person needs are accounted for. You in your roles as parliamentarians are the very warp upon which your countries laws are woven.

Young children are everybody’s business. Today and over the next few days we are focusing on how young children are the business of the legislature. The Bernard van Leer Foundation has been supporting young children in Brazil for 36 years and in other countries in this region for even longer.

Brazil’s democratic journey is and has been a road to success. Just about the same time I had finally landed a paid job with a member of the U.S. Congress – I did eventually get the opportunity to write laws and policies – Brazil was debating the finer points of its new constitution. And that constitution guarantees social and economic rights for children, which in many nations including my own, are not recognized. But there they are in Article 227, which recognizes the youngest members of society as worthy citizens who have the right to education, health and social protection along with a slew of civic rights.

The road to success as you know, however, is always under construction. Legislation has a litmus test: it has to be implementable. So, it should be as simple as possible but no simpler and as catholic as possible- catholic in the true sense of the word – such that it speaks to the broadest possible social base in society. Even excellent legal frameworks have gaps where the intention, the spirit of the law, is not reflected in the practice of the policy.

Why? Why are there gaps between policy and practice? One, because parliamentarians like to create new laws more often than they like to fix existing ones. It’s true. You know it. Not least because we would like to have a law in our very own name! Two, law requires the concomitant budgetary resources to ensure that they get translated into real opportunities for ordinary citizens.

Once when I was articulating the need to get the policy framework right for young children a social activist stood up and said, ‘’you can’t eat a policy.’’ Of course she had no idea of my own history. I really could relate to this statement.

She was right. Policy and legal frameworks are only as valuable as their translation into real services health, nutrition, education and social protection. Young children’s rights will remain in the fantasy realm – what we call ‘’unfunded mandates’’ unless and until there is money behind them.

Brazil is on the road to success in terms of turning law, policy and regulations into real development for children. Proinfancia, Brazil Carinhoso, and the school feeding programs all attest to it. Neighbouring countries also have success stories to tell such as the Crece Contigo’ in Chile, or de Cendes in Mexico,

Bernard van Leer knows when federal and state programs are working because we talk to child advocates from all walks of life every day. Here again is the role of the parliamentarian. You have the privilege of a constituency and you are the only arm that has it. You make democracy meaningful to the youngest citizen just by listening to them, to their parents, to the advocates, who work to deliver services – to those who touch children every day.

Young children are undoubtedly your business, but also the business of your constituents. And often the children themselves will let you know if something works. If not with their democratic voice, through their height, and their weight and their capacity to learn. Often whether there is a gap between the legal intention and the practice can be seen in the very bodies of the youngest citizens. As Avishai Margalit said, you can measure the health of any society by the welfare of its youngest members.

Parliamentarians are in a privileged position to not only measure but to act by closing the gaps between law and practice. This requires discipline to look back on what you have created, a close relationship with constituencies in civil society who can help you understand those gaps, and diligence in correcting what has not been implemented well. This conference is an excellent opportunity to look across nations and within Brazil to test whether the legal framework passes the litmus test of implementation. I am looking forward to learning and sharing about programs that have passed this litmus test over the next few days. 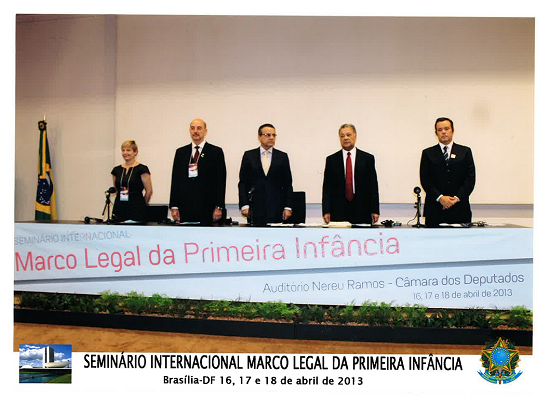