‘All Eyes Are on the United States’, Lisa Jordan’s New Blog for The Huffington Post 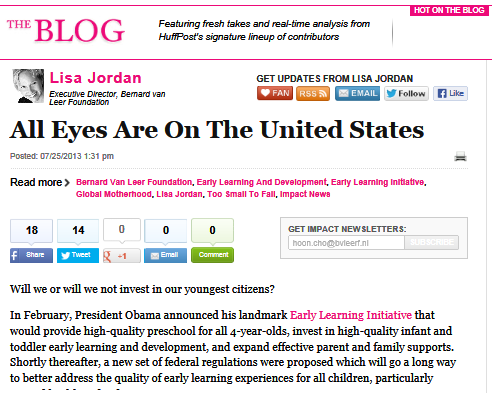 Will we or will we not invest in our youngest citizens?

In February, President Obama announced his landmark Early Learning Initiative that would provide high-quality preschool for all 4-year-olds, invest in high-quality infant and toddler early learning and development, and expand effective parent and family supports. Shortly thereafter, a new set of federal regulations were proposed which will go a long way to better address the quality of early learning experiences for all children, particularly around health and safety issues.
But will these regulations happen?

There are fears that the Obama Administration is reluctant to risk political capital to prioritize and aggressively push for his Initiative unless early childhood investments will boost the President’s approval ratings. This is one investment that should.

As the leader of an organization dedicated to improving the lives of young children, I’ve seen first-hand the benefit of these investments — from Arizona to Ankara, Mississippi to East Africa’s Maasai villages and from New Mexico to the Negev desert. We see what difference it makes to those children who need it most. Nobody should doubt that the push for universal preschool and other essential services for young children is long overdue in the United States.

Many countries perceived as current or emerging economic competitors of the United States are far ahead of us in preschool investments. As of last year, Mexico accomplished its goal of universal preschool for 4-year-olds. Brazil and Peru have recently made multi-billion dollar investments in expanding access to high-quality early childhood services. In countries throughout Europe, preschool has largely been shielded from the recent austerity-driven cuts in public services, as the costs to society of foregoing early childhood services are understood across the political spectrum in Europe as far too high.

According to research published in The Lancet in 2011, every dollar spent increasing preschool enrollment to 25 to 50 percent in low- and middle-income countries has the potential to generate between $6.40 and $17.60 in individual and societal benefits.

In the United States, there are some promising indications of growing support. Hillary Clinton recently spoke of early childhood development as one of her highest priorities. The Clinton Foundation and Next Generation just launched Too Small to Fail, a new initiative to improve the health and well-being of children ages zero to five. Influential business leaders are among those who have taken the ReadyNation Pledge, indicating that they understand that the future economic competitiveness of the United States rests on quality early childhood development programs. Soldiers get it, too. Mission: Readiness, Military Leaders for Kids recently released ‘A Commitment to Pre-K is a Commitment to National Security’, a report showing that the administration’s early education proposals could lead to two million more high school graduates and $150 billion in economic benefits over the next 10 years.

Unfortunately, in an era of financial shortages and political vitriol, elected officials often consider long-term investments — particularly those that don’t benefit people of voting age — far too politically risky. Given the ample evidence about the human and economic benefits of doing so, investing in early childhood should be a no-brainer. However, the costs would be borne in the present, while the benefits would play out over future electoral cycles, making investment far less politically palatable. For this reason, action requires strong, visionary leadership — and well-informed voters holding political leaders’ feet to the fire.

Increasing investment in young children in the United States would be a critical step forward during a time of growing inequality. It may be a self-evident truth that we are all created equal, but inequalities entrenched by the age of five can last a lifetime. For young kids who lack either a supportive home environment or a good preschool, succeeding at school — and, some might say, at life — becomes an exponentially more difficult task.

The recent UNICEF report, ‘Child Well-Being in Rich Countries: A Comparative Overview’, found that the U.S. ranked 26th out of 29 developed countries on overall well-being of their children. No U.S. citizen should accept that, and no U.S. citizen — no matter how young — deserves less than a government that invests in his or her greatest potential at the start of life.

Lisa Jordan is Executive Director of the Bernard van Leer Foundation. With over twenty years of experience in the field of philanthropy, her work is dedicated to improving opportunities for children who are growing up in socially and economically difficult circumstances.