Hopes and aspirations of Subhadra Sabara….

Subhadra Sabara is a five year old girl from B.Nuasahi village in Sorada block of Ganjam district in Odisha, the eastern state in India.

What endears everyone to Subhadra is her beautiful smile, determined eyes and her eagerness to show all that she learns in her community based child development center (CBCD) operated by the NGO PREM.

B.Nuasahi is a scenic village in interior Ganjam. The village is a tribal village. Most of the inhabitants of this village depend on ‘shifting cultivation’ for their livelihood. They also work as daily wage labourers in others’ farms or on construction sites in cities.

Subhadra’s parents depend on sifting cultivation and in selling of minor forest products. Subhadra has two younger siblings. Prior to the opening of the CBCD center in her village, she used to take care of her siblings and run errands. The nearest health care center is 7 kms away and the anganwadi center ( preschool run by the Government under Integrated Child Development Scheme) is 2 kms away. The village is not electrified and has no safe drinking water or sanitation facilities. Moreover, the anganwadi teacher does not speak Subhadra’s language nor is aware of the culture and tradition of her tribe. Subhadra’s parents have never been to school and were scared to send her to the anganwadi as they even had communication problems with the teacher. 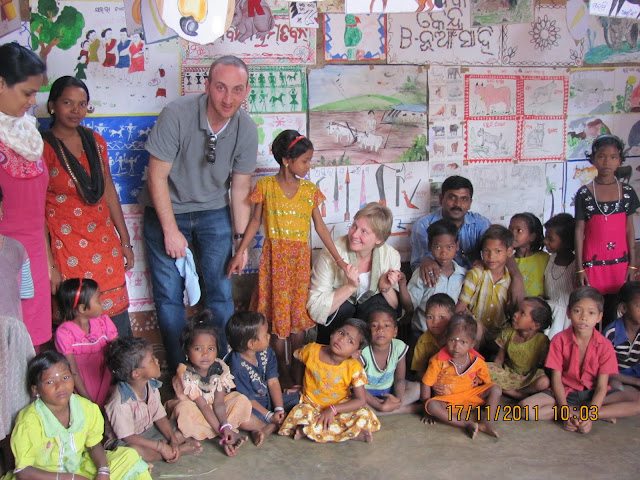 Subhadra at her CBCD center with her friends….

After the CBCD center was opened in her village, Subhadra goes regularly there and has learnt to read and write in her mother tongue as well as the regional language Odiya. She even recites nursery rhymes. Her teacher is from her village and is trained in joyful teaching and learning method by PREM. The center is full of display materials, learning materials, colourful toys most of them done from local materials. All the children between two and half years to six years come o the center. Many have graduated from the center and are now enrolled in primary schools in nearby villages and in residential schools.

Out of the 8 million tribal people in the state of Odisha, 1.4 million are children between 0-6 years of age. Among the tribal population in Orissa, literacy rates are 37%, compared to 63% for the state and 65% for the country. Although 77% of tribal children attend a centre run by the government’s Integrated Child Development Services (ICDS), more centres are needed. Where centres do operate, there are problems of poorly trained teachers who are regularly absent, unsafe physical infrastructure, and discriminatory attitudes towards tribal children and their parents. Many do not speak the official state language, and the absence of tribal languages in ICDS centres is one of the main barriers to improve learning outcomes. Only 4 to 5 per cent of centres use the children’s mother tongue as a language of instruction.

Bernard van Leer Foundation has been supporting the creation of multilingual pre-schools in Odisha since 2007 and currently supports more than 764 centers (both CBCD as well as anganwadis) in 8 predominantly tribal districts catering to 14112 children. PREM, CYSD, CLAP and Sikshyasandhan are the local partners of the Foundation in Odisha.

Subhadra is preparing to go to primary school this year. When asked what she wants to do when she grows up, she proudly says ” I want to be a doctor”. All the best Subhadra and all your friends in the CBCD center!