How we made the documentary ‘The Beginning of Life’

I’m part of a team of filmmakers who believe in the power of films to transform the world. With that mission, we begin every film we make by asking ourselves: how can this topic be addressed in a way that makes the film a helpful tool for society?

When we were invited to make a movie about early childhood development by the Bernard van Leer Foundation, Maria Cecilia Souto Vidigal Foundation and Alana Institute, at first we felt honoured. Then we felt aware of the huge responsibility that it would be.

We began by spending a long time assembling and studying research, to understand what angle the film would take. We were intrigued to read about how children are determined not by their genes alone, but by the interplay between genetics and the environment in which they grow up. What are the most important elements of the environment, and children’s interactions with it? Do people know about this, and value it?

We travelled everywhere: four continents, nine countries, for three years in total. Everywhere we found parents wanting the same for their kids: a poor mother from the slums in Brazil, and top model Gisele Bundchen, had the same exact answer – “my dream for my kids is to have their voices heard”. The difference lies in whether families can provide the environment their kids need to thrive.

Watch and share short clips from the documentary 'The Beginning of Life'.

By making this film, I came to understand how important the early years are. So many people worry about their kids getting to college or getting a job. What we should really focus on is: are kids being hugged, playing freely, hearing stories? Are they being nurtured in a safe environment? That is what makes healthy, creative and capable adults – who, in turn, make a great society.

The film, The Beginning of Life, has already had a tremendous impact since its release in May 2016. It was screened to a full house at the United Nations in New York, it has been aired for free 6,000 times in 50 countries via www.videocamp.com, it became the most-viewed documentary in theaters in Brazil, and it has been adopted by UNICEF for its global ECD campaign in 2017. If you would like to see the film, you can find it on Netflix in over 190 countries. 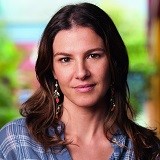 A movie director and writer, Estela Renner is also a co-founder of Maria Farinha Filmes.