Making Children a Priority on Grandparents Day and Every Day 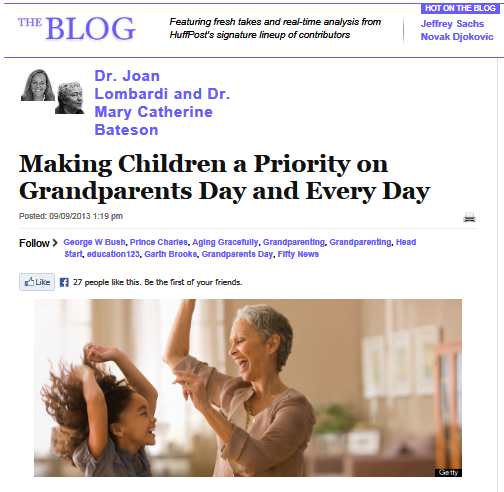 All have become first-time grandparents since we celebrated Grandparents Day last September.

They have joined a club — a grandparents club — that is already an estimated 65 million strong and growing. By 2020, the number of grandparents in the United States is expected to top 80 million. And who knows how many millions more older adults are great aunts and uncles, mentors and caregivers of young children?

Mirroring the general population, our political leadership is awash with older adults. The average age of a U.S. senator is 62, meaning the chances are very good they, too, are either grandparents or play some other significant role in the lives of their younger relatives. And over in the House of Representatives, the average age is 57.

If you asked any one of these leaders how they felt about being a grandparent and leaving a legacy for their grandchildren, most would wax poetic.

And yet, there’s a big disconnect between what our politicians say and how they act. Last year, after a divided Congress couldn’t agree on a budget, hundreds of federal policies and programs became the targets of sequestration — budget cuts that will continue for the next 10 years.

Among the casualties is Head Start. This school year, because of sequestration, Head Start will be serving far fewer at-risk children — 57,000, according to most estimates.

That number represents far more than empty chairs in the classroom. It represents an empty promise; a promise we made to our most vulnerable children that we would provide them with the learning and skills they need to compete successfully in school and in the workplace. Now, instead, they can expect to enter kindergarten already behind the curve, without the social and learning skills most of their peers have already mastered.

The fact that 57,000 children will be denied access to Head Start this year should worry everyone. Because we cannot win the future without ensuring that every child reaches his or her full potential.

Things could get even worse. Congress is back from its summer recess and once again is about to enter into budget negotiations. Should our legislators fail to come to an agreement, we could experience another shutdown of the federal government and even more cuts and furloughs due to sequestration. Next year, thousands more young children could be turned away from Head Start and similar programs.

We can’t let that happen. As we celebrate Grandparents Day this week, every adult over 50 should reflect on what we can and must do to ensure our young people have the support and tools they need to succeed. We call on grandparents in the general population and grandparents in Congress to use their influence and their votes to protect the future of children too young to vote.

Over the next week, think of what you can do to stand up for our young. To get you started, here are a few suggestions:

• Join us and Do Something Grand. As honorary co-chairs of Generations United Seniors4Kids, we invite you to become a Senior4Kids and raise your Grand Voice in support of investments in early childhood. You can write letters to newspapers, email public leaders and attend town hall meetings. Let others know that our children’s future is everyone’s business.

• Celebrate Grandparents Day through active engagement. Spend time with a grandchild or other young person, whether in-person, by phone or on Facebook. Get ideas at grandparentsday.org. And visit the Generations United website throughout the year to keep up with the latest in intergenerational news and ideas.

• Mentor or tutor a young person. Learn about volunteer opportunities, such as Senior Corp’s Foster Grandparents or AARP’s Experience Corps. Or, find an intergenerational center near you.

• Invest your time. Share your companionship, wisdom and values with a young person you know. If you don’t have a child in your life, find one!

• Be a role model. Talk about civic responsibility with young people and why they need to get involved — and stay involved — throughout their lives.

This year, 57,000 children are at least temporarily denied a seat at the Head Start Table. Next year, it could be more. As an older adult who cares about our children’s future, will you let that happen?