Managing Urban95 in Tel Aviv-Yafo: An interview with Bosmat Sfaadia-Wolf

Bosmat Sfaadia-Wolf manages the Urban95 programme in Tel Aviv-Yafo, and has been employed by Tel Aviv-Yafo municipality since May 2017. In this interview she explains her unusual employment situation and what the Urban95 initiative is currently doing in the city.

Why is your job so unusual?
I’m employed by the municipality of Tel Aviv-Yafo, on a three-year contract. But my salary is covered by the Bernard van Leer Foundation, through a three-year grant to the Tel Aviv Foundation, and my job includes managing the Urban95 programme budget.

It’s the first time the municipality of Tel Aviv has worked with this model. Previously, when the municipality has collaborated with philanthropic foundations, they have tended to remain external – Bloomberg Philanthropies, for example, have a team of advisers who report to the Mayor, but are not actually part of the municipal administration.

I’m employed in the Community, Culture and Sport Administration within the Department for Community Planning & Development. My immediate manager reports to the Head of the Administration, who reports directly to the Mayor.

What are the advantages of being a municipal employee rather than an external advisor?
This way, I’m treated like an insider. I’m invited to meetings and it’s easier to organise meetings, with colleagues in the department and across departments. Having my voice in meetings, encouraging people to consider families with young children in their decisions, is really important and creates a lot of opportunities to make connections.

Why the choice to locate your position in Community, Culture and Sport?
It’s one of the biggest departments in the municipality, with over a thousand employees, and it has responsibility for public infrastructure all over the city which families use or which can be used to reach out to families – community centers, libraries, cultural centres, and other institutions.

By its nature, the department does a lot of collaborative work with other departments in the municipal government, which also helps. As responsibility for decisions and services impacting young children and families is dispersed across departments, you need to be in a position where you can easily collaborate with others.

Another advantage is that my manager, and the head of the administration, are both extremely supportive and enthusiastic about the Urban95 initiative.

Do you feel conscious of being in a different position than your colleagues?
Of course I’m not in a regular position as a municipal employee, as I also have responsibility for deciding how to spend the Urban95 budget in partnership with the Bernard van Leer Foundation. It’s a new situation for everyone and we’re all learning as we go along how best to handle it.

It does create challenges, but it is also creating a great deal of interest among colleagues in exploring the potential value of what we can create together. What’s crucial is that I come with an attitude of humility – I’m not here to tell people to do their jobs differently.

When you approach colleagues with an offer to help, to explore new ideas that can help them reach their objectives, that’s when doors can open. For example, I have been working with colleagues in the research unit to gather better information on the city’s families and children.

What kind of research are you working on?
We’ve assembled focus groups from across the city, trying to make sure we reach a representative sample of families from all backgrounds and socio-economic indicators. So far we’ve completed three focus groups and six more are being organised. We’re asking these parents about their daily lives, their biggest challenges.

It’s already generating significant interest internally, with a number of colleagues from different departments expressing interest in what we’re finding out.

You’re planning a study visit for senior colleagues to Copenhagen – what’s the aim?
The idea is to take top-level managers from different departments in the municipality to see some examples of how another city has approached policy issues and public spaces from a young child’s perspective.

It’s an experimental idea and we’re interested to see how it works. Our hope is that it will be both a learning experience and an opportunity for the managers to think through together how families with young children are a cross-cutting issue in their work.

And the programme is helping to develop an app for parents. How is that going?
The city has an online platform, DigiTel, that enables citizens to communicate with the municipal government about a wide range of issues, and research by Bloomberg into the idea of developing a part of this platform specifically for parents was one of the first initiatives that was proposed for the Urban95 programme in the city.

The app is called DigiTaf – in Hebrew, that implies “digital platform for toddlers” – and it should be ready in December. The aim is that it will be a one-stop shop for parents to find out everything they need to know that’s relevant for young children. It’s a good example of collaboration involving multiple departments with the common aim of improving service delivery and making life easier for the city’s parents.

We’re currently working with Vroom, the app which prompts parents with “brainbuilding” suggestions for playing and talking with their young children, to translate its messages into Hebrew and incorporate them in DigiTaf. We may also use the translated messages in other ways – signage in playgrounds, for example.

Finally, what was your own background before you took up this unique role
I’m an architect and an urban planner – I’ve long been interested in how cities change to serve their users. And I’m a mum, so I have direct experience every day of living in Tel Aviv with young children. It’s great to be able to do work that enables me to combine all of those perspectives. 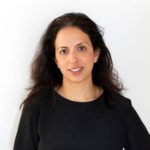 Bosmat Sfadia-Wolf
Urban95 Program Manager, Tel Aviv – Yafo Municipality
Bosmat joined the Tel Aviv – Yafo municipality to lead the Urban95 programme, a partnership between the municipality, the Bernard van Leer Foundation and the Tel Aviv Foundation. The Urban95 programme incorporates a focus on early childhood development into the planning and management of the city. Prior to joining the municipality, Bosmat had gained experience as an architect and specialized in leading urban renewal projects. Bosmat holds a B.Arch. from Bezalel Academy of Arts and Design (Jerusalem) and a MA in Housing & Urbanism from the Architectural Association School of Architecture (London). Born and raised in Tel Aviv, Bosmat now raises her two young children in the ‘nonstop city’.