Over the past two days I have had the pleasure of re-imagining learning and play — with a group of 250 school teachers, digital designers, and play advocates brought together by the LEGO foundation.

In the meantime, however, in the back of my mind I had that slight unease that every parent has who is away from their children. These days, that unease manifests in my household as ‘’is he playing Minecraft all day?’’ My youngest son is obsessed with Minecraft like many 10 year olds.

The LEGO Idea Conference brought my personal household dilemma into sharp relief. I have a child completely disengaged from the classroom and fully engaged in a cooperative gaming experience. Everyone at the conference understands this. One small group developed a BRILLIANT idea to re-imagine learning and play based upon this common understanding.

They said: “Imagine if in ten years the headline in your local newspaper was “What happened to the Classroom?”

What engages kids? Why are our classrooms so antiquated? One of the participants noted that if you took a surgeon from 1914 and put him in an operation room today he would not recognize it. But if you put a teacher from 1914 in the classroom, he would immediately recognize the environment. These classrooms are outdated both in method and content. They are not preparing children for the world they live in, never mind to enter the workforce with so-called 21st century workforce skills. So children are checking out and checking into other spaces. In some games like Minecraft they get to create their own worlds, to set up the rules, to solve problems, to create competition and/or cooperation, and to pick who they want to play with – often based upon what skills another child might bring with him or her into the world.

I have often been surprised by who my son is playing with on-line. Sometimes it will be someone he doesn’t like from school. However, the other child has a capacity that is needed to enhance the world they have created. In educational terms, this is cooperative learning. One child knows something that another doesn’t understand. The one with the skill shares it. Playmates are the teachers in this process. As everyone knows who works with kids, they learn more from peers than they do from adults.

What if the new classrooms of the future were on line platforms, created by and for children to learn, play and create together?

We dubbed these ‘’Know Networks.’’ Know Networks could be the new engines of learning. With Know Networks children could develop their own questions; create the peer networks they need in order to answer those questions; and download fun curricula for the technical skills they need — think math skills (Dragonbox) or vocabulary (FunBrain). When they have created the thing they wanted to create or solved the problem they want to solve, they create and build a new layer of the Know Network. Like online collaborative gaming, the basic framework could be created by adults but just as a seed, really, from which children’s own intrinsic curiosity could guide the growth of the networks. Imagine if Khan Academy was just a base platform through which children developed their own questions to explore, grew their own networks, pulled from a menu for technical teaching and knowledge and pulled other kids into their networks in order to learn from each other?

Now, I can hear all the ‘buts’. But, but, but, and the biggest one, how would we know whether and what they are learning?

In our current classrooms children check out (as we did when we were kids) because they do not understand the relevance of learning time tables, grammar or algebra, vocabulary, history or geography. And we always say, ‘’it will be relevant later.’’ Some of it is but really, some of it isn’t. Why did you need to know the name of the 13th President? Have you ever used that fact? We are selling education to our kids with a promise of future benefits, that they cannot relate to and in fact, we know is often really just not true.

Educators in the forefront of education right now are already trying to figure out how to measure the 21st century skills. These are creativity, problem solving, curiosity, empathy and other cognitive, behavioural and learning skills that are rapidly becoming as important as our traditional reading, writing and arithmetic. Sadly, the majority of the classrooms around the world do not actually teach any of those skills. 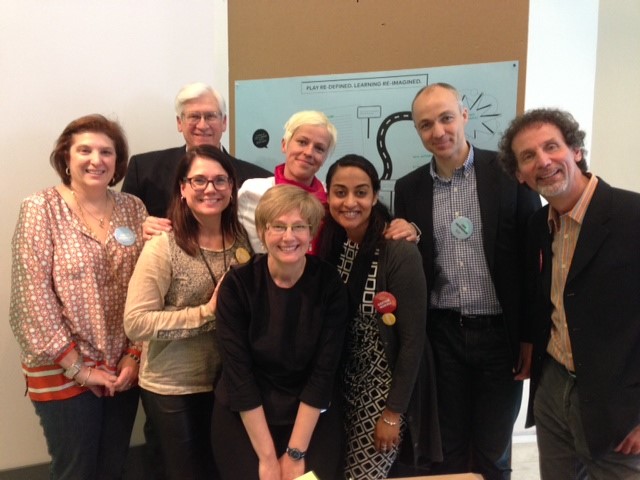 As Bill Drayton noted at the beginning of the conference, ‘’we are living in a world defined by rapid change, not repetition.’’ We need a new educational approach that recognizes the fact that we do not know which facts or even if any facts will be relevant in the future.

Problem solving, innovation, collaboration and capacity to cope with disruption are skills we all need now in order to live with the rapid pace of change.

Our group thought to scrap the concept of diplomas and introduce the concept of do-plomas that recognize immediately the value of successful problem solving and innovation.

Know Networks and Do-plomas are one way in which we re-imagined learning and play to unleash children’s capacity in today and tomorrow’s world.