“Spaces, Places and Situations to Live Well, Happily and in Harmony Together.” – Rights and Well-Being of Roma children

Roma children’s dreams and actions for a better future in an extremely difficult context, in Rome, Italy.

Since February 2012, the Bernard van Leer supported SA’R SAN Project is working in the difficult and complex Tor Sapienza neighborhood on the eastern periphery of the city of Rome to promote and reinforce the rights and well-being of Roma children and families and to create favorable conditions for social inclusion and individual-community development. Two full afternoons per week, our expressive, participatory Creative Arts Workshops at the Michele Testa Cultural Center offer opportunities for Roma children and youth to express their ideas and feelings, needs and cultures, encounter others, acquire self esteem and build cognitive and social skills. Parellely, another weekly workshop in the multi-ethnic neighborhood Elementary School has strived to create an effective collaborative bridge between children, families and school experience.

Overall the project strives to facilitate and accompany communication and collaboration between the key actors in the children’s everyday care environments: their peers, families, schools, neighbors, social services, local associations, the Municipality, etc. One primary goal is to bring the (Roma and non) children’s voices and proposals into a collaborative, neighborhood conversation and co-planning process concerning the dramatic situation of Roma children’s and families’ everyday life in order to identify shared strategies and actions for the improvement of neighbourhood relations, spaces and overall living conditions. 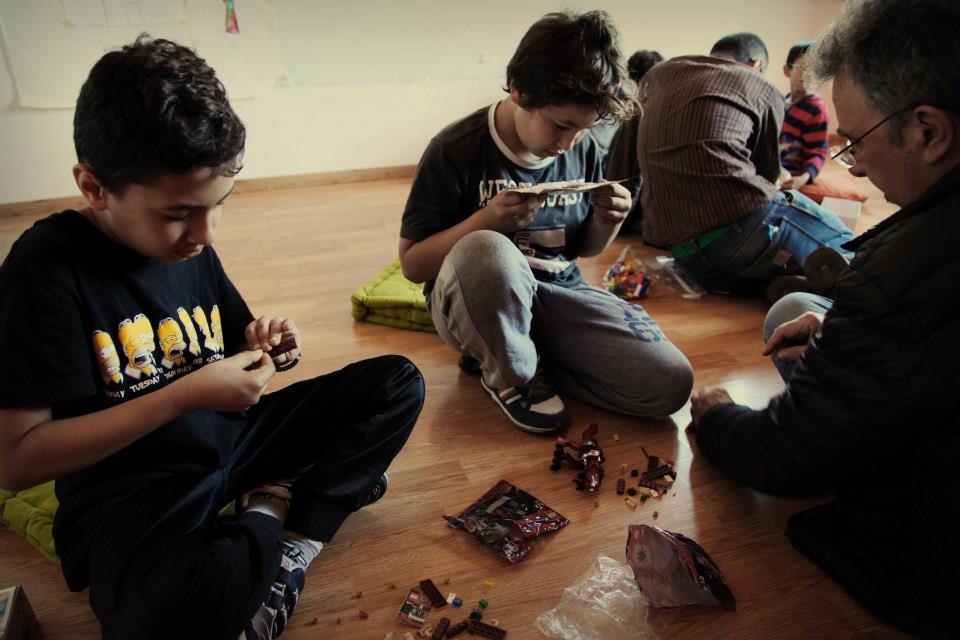 On March 25 2013, the children of the 5B class, at the Marco Pizzicaroli Elementary School in Tor Sapienza opened the first two of the 12 huge boxes of Lego components which the Lego Foundation has kindly donated to the Sàr San Project and finally began excitedly inventing the first pieces of their heart-felt, evolving “messages” to their Roma classmates and their families and to the entire neighborhood: their ideas for “spaces, places and situations to live well, happily and in harmony together.”

Since last November, this Sàr San school nucleus has been working in parallel and having exchanges with our Roma children team which has been active – for over a year – in the nearby Michel Testa Center’s after-school workshops. Both groups have been exploring and expressing – with various media – their ideas and feelings on their rights and needs to live well, happily and collaboratively together in this difficult, multi-cultural neighborhood on Rome’s eastern edge.

In the next months, their efforts and enthusiasm will make the most of the new building materials at hand. Through Lego modeling and auto-narration of the little “projects” they develop, the Sàr San team and the children intend to try to bring attention to the numerous “ingredients” which they’ve identified for making their homes and neighborhood better places for “living together”. Their ideas, questions and products will be presented to the school and local community in several festive events and public consultations which are planned in the months of May and June.

This is not an easy task – especially for our Roma children – in a context which presents an almost daily disruption of these families’ already precarious and extremely difficult living conditions. Over the last several months our Project has literally lost several children whose families have been forcefully and illegally evicted from their spontaneous encampments without any opportunity for alternative housing. In the last weeks, in view of the upcoming elections in May, the City Administration has stepped up city-wide pressures on and provocation of the Roma community. Some of our families are, once again, in danger of eviction.

On April 12, the first Lego boxes were opened with the Roma children at our afternoon Workshops at the MT Cultural Center. Unlike the school class, for most of these very young Roma it was the first time they had seen these wonderful little learning tools. Their excitement was uncontainable. Our approach in the Center will have to be in little, careful steps … the use of Lego will be a very important component and learning tool in the next years’ expanded collaboration between school, families and community. We are certain that the enjoyment and energies of all the Sàr San children will contribute new ideas and messages to the growing “community conversation” about the neighborhood the children and families want.

Over the last year, the children have grown together – and acquired glimmers of hope – and are beginning to really believe that they themselves can make a change. They now understand that they are creating something useful which might just serve to “teach the elders” how to overcome mistrust and suspicion of “others” and how to collaboratively build – with small steps and little actions – a better future for all.