I am Rupak Kumar Gouda, a 17-year-old child leader from Humara Bachpan Campaign. We are a child-led movement of 35,500 children who advocate for better living conditions in low income neighbourhoods in 23 Indian cities. Our vision is to create a society that fosters active citizenry among children. We work with children and families from poor urban neighbourhoods to create safe and inclusive, child-friendly cities. Our campaign recently won the prestigious Hero Award of the PeaceJam Foundation, under the category of best youth act. Jasmin Nissa, child leader from Bhubaneswar, and I visited Monte Carlo to receive the award on behalf of all the child leaders. It was a proud moment for all of us in India. When our struggle to ensure children’s participation in city planning began in 2012, we never imagined that our efforts would be acknowledged and appreciated in a global forum under One Billion Acts of Peace. 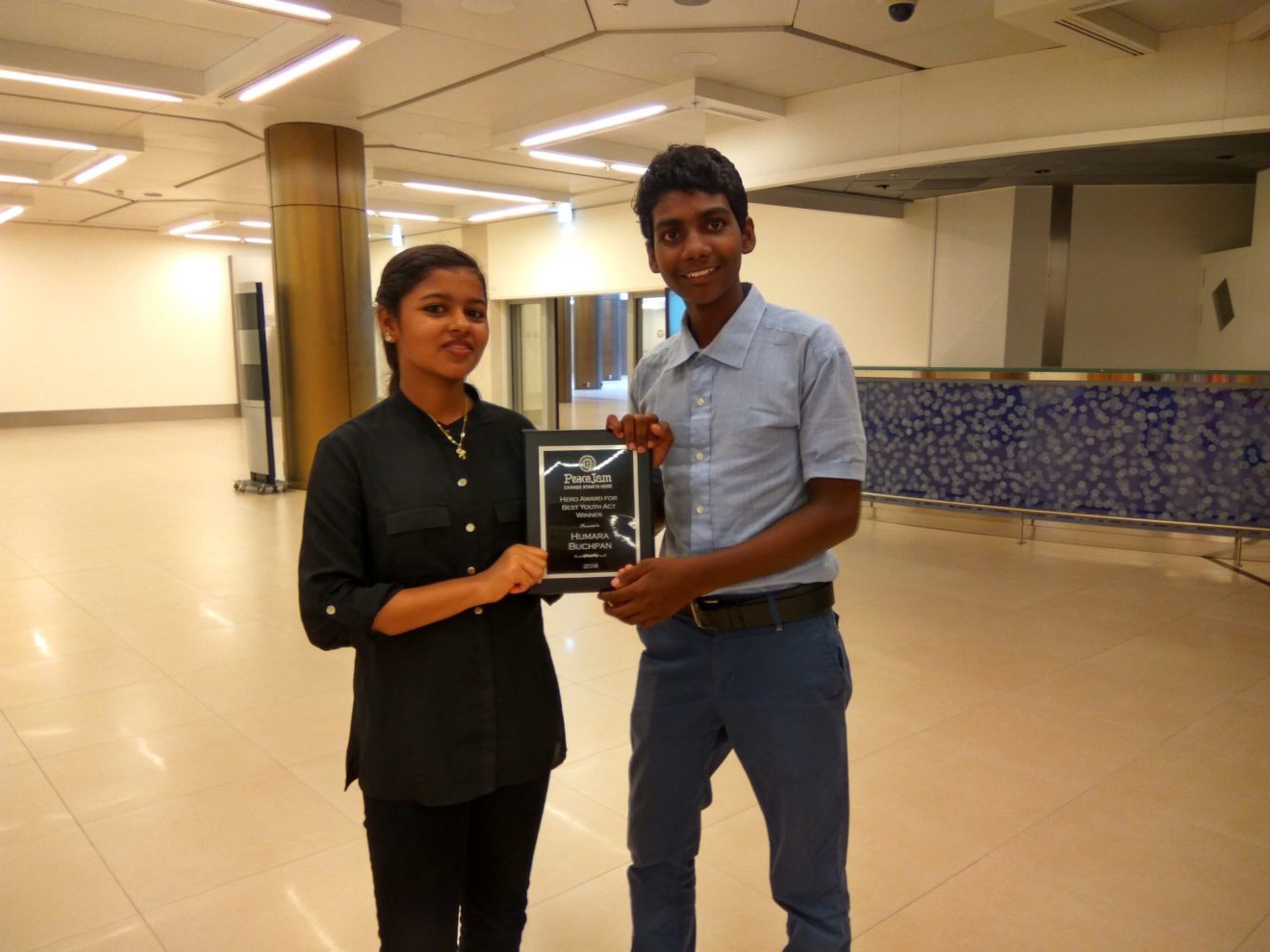 We travelled via Istanbul to reach Monaco. Jasmin and I had already travelled to the Children for Transforming Society (CATS) conference in Caux, Switzerland. We had also represented India in Washington D.C. at a meeting about designing safeguards for World Bank projects. But this was different, as we were happy that we had won the award. We reached Monaco on 11 June 2016, and attended a workshop in which 300 children from six countries participated. We interacted with them, learnt various games, and shared information about the work we do in India. The workshop focused on how humanitarian values can be inculcated in children like us, and Jasmin and I thoroughly enjoyed it. All the time, we were thinking about how we could take our learnings back to all the child leaders in India.

On the first day of the workshop, during lunch, we met Nobel Peace Prize winner Rigoberta Menchu. She is a very caring lady and everyone wanted to be near her. She was giving everyone time to interact with her. As she didn’t speak English it was a little difficult to communicate with her initially, but her interpreter Romy translated all our queries.

Every time we travel to cities outside India it makes me wonder if Bhubaneswar or other Indian cities can have ever similar services such as better public transport, a clean environment and parks. I feel such services allow children like me to be not only happy and safe but also empowered. Next day, the Nobel Laurete began the workshop with a session on spiritualism and shared experiences from her life. She is an inspiration; listening to her, we realised nothing comes easy in life. Jasmin and I had tears listening to her stories, it reminded us how our parents are struggling to make things work for us. If it weren’t for platforms like the Humara Bachpan Campaign, children – especially those in poverty – wouldn’t get a chance to express themselves. 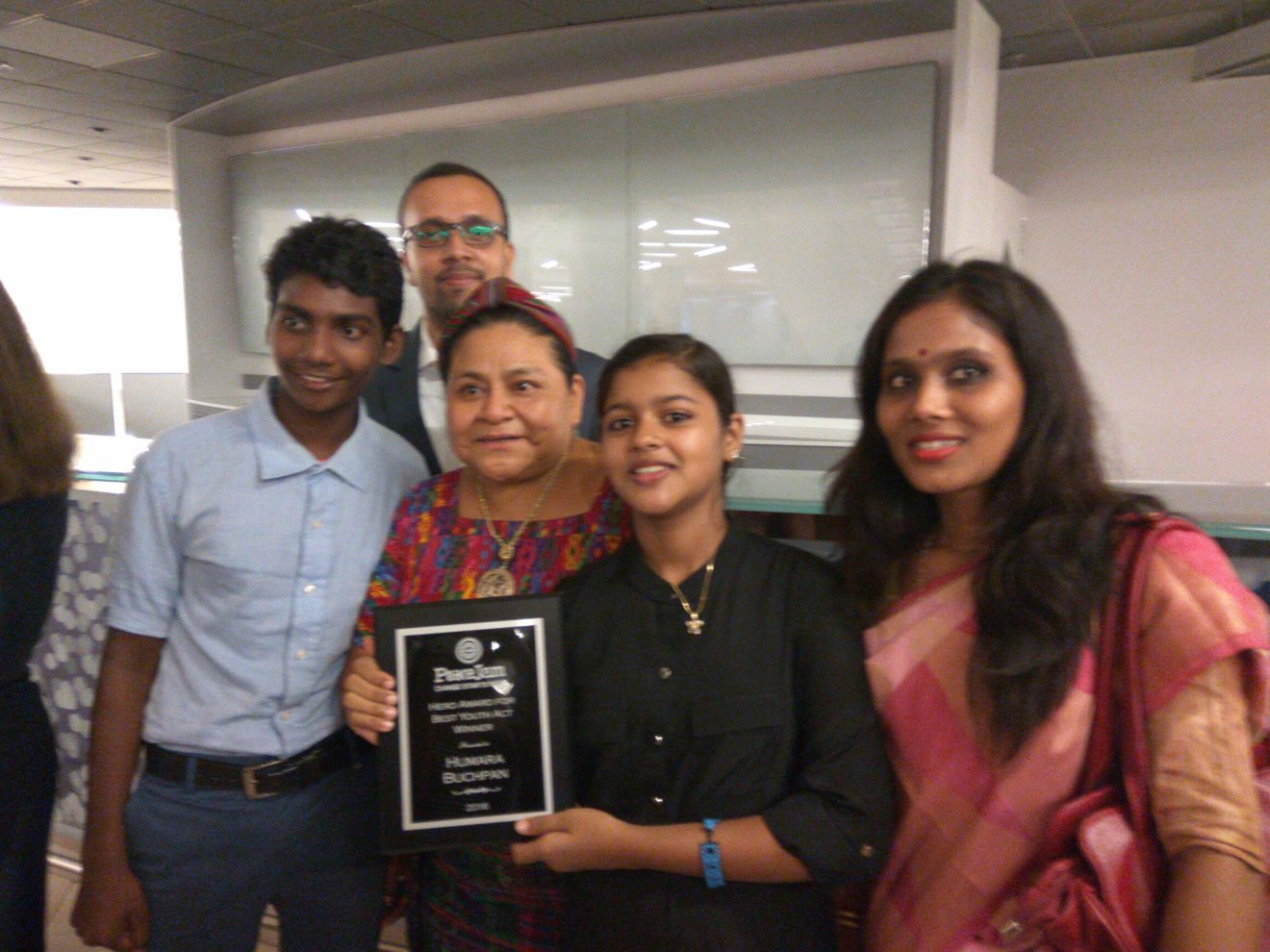 On the third day, we watched a film on Rigoberta, “Daughter of the Maya”, which captured her struggle during Guatemala’s military government, and her drive to make a difference for all the people in her community. At some instances I was choked; I never realised people can go through such hardships. It also inspired me, in many ways, to continue the efforts that we as child leaders are making in our neighbourhoods. Rigoberta has the most beautiful smile, straight from her heart. We received our award in a ceremony, after which we went to the beach to celebrate.

Returning to our room that night, everything appeared to be like a dream. I knew I had to be back in my country, to change things the way Rigoberta did. While packing my stuff I found a poster with her autograph; it moved me. Rigoberta will always be an inspiration for me.