Irene Rizzini, President of the International Center for Research and Policy on Childhood (CIESPI) at the Pontifical Catholic University of Rio de Janeiro (PUC-Rio), and Malcolm Bush, Research Fellow Chapin Hall at the University of Chicago, and Senior Consultant for CIESPI

The Bernard van Leer Foundation commissioned CIESPI (International Center for Research and Policy on Childhood) to study opportunities and challenges presented by the Foundation’s three new goals – reducing violence, improving the physical environment and scaling early learning – in low-income communities in urban Brazil. This article is a summary of their report.

As well as a wide variety of reports, documents, and news stories, for this research CIESPI carried out an in- depth examination of the situation of young children in two low-income communities in Rio de Janeiro: Rocinha and Bangu. This involved interviews and focus groups with neighborhood residents, youth, service providers and public officials.

Rocinha is the largest low-income community in Brazil. Bangu is a more moderate-income community with some low-income sub-sections (Nova Alianca, Vila Alianca and Minha Deusa, and a poorer area within Minha Deusa called Beira Linha) which we chose for the study because they are on the periphery of the city, forty kilometers from the center. The study included a representative range of environments from the partly planned to the worst of unplanned shacks.

This article discusses in turn the relevance of the Foundation’s three goals – improving physical environments, reducing violence, and scaling early learning – in these communities, and in low-income urban communities in Brazil more generally. For each goal, the context is described and some priorities and opportunities identified. It is important to note that the three topics overlap in many ways. Violence and poverty affect many aspects of life in Rio’s low- income communities, and relief from these basic problems would improve the overall life chances of young children.

Before addressing the three goals in turn, it is helpful to bear in mind some overall challenges and opportunities. In general, there is a stark contrast in Brazil between the comprehensive and detailed rights for children guaranteed by the 1988 Constitution and the 1990 Statute on the Child and the Adolescent, and the implementation of those rights in the lives of children in low-income communities. In a sense, the challenge is implementing rights that already exist.

This challenge is exacerbated by the fact that there is little tradition of public policy advocacy and monitoring in the non-profit sector in Brazil, because of the long years of oligarchic and dictatorial rule. This includes lack of any tradition of public access to detailed, line-item public budgets to see whether funds are being spent as planned.

A key opportunity therefore is better monitoring of the public sector to persuade the different levels of government to fulfill their responsibilities under the law. Better monitoring relies on a number of tools. These include regular output of reliable data that can be thrust into the public debate, and local activism to draw public attention.

Local activism in turn requires strong and honest local non-profits that connect in networks to amplify their voice and effectiveness. There is a growing practice of forming non-profit networks to press for change. At the local level, however, these networks are chronically short of resources, and often lack the technical tools to collect the kind of evidence needed to make their case and to present it in ways that gain the attention of the appropriate public bodies. They would benefit from technical assistance in areas such as public budget analysis and advocacy.

The presence of effective community organisations can make a big difference in the lives of low-income communities, especially in providing childcare. But such community organisations need help to tap public and private funds. Amplifying the local residents’ voices inside and outside their community – and promoting fair-minded media coverage – is also an important opportunity, especially to tackle the problem of discrimination against the poor and the non-white.

Looking at wider structural issues, about 50% of Brazilian workers work in the informal sector, where they lack the basic protections of a minimum wage, anti-discrimination rights, and access to a public pension. Some economists argue that changes in the tax system to reduce employers’ tax on employment would bring many people in the informal sector into the formal sector, with many benefits to low-income workers and their young children.

Finally, Brazil andRio in particular are currently in the international spotlight because of the 2014 World Cup and the 2016 Olympic Games. A great deal of infrastructure investment is planned for these events. Community groups and coalitions could draw up an agenda for how the preparation for the events could be shaped to permanently benefit the residents of low-income communities.

The basic characteristics of low-income communities in Rio de Janeiro and elsewhere in urban Brazil are that most of them are unplanned and built without any reference to building codes. As a result they are poorly constructed, often lack basic urban infrastructure, and are overcrowded, dangerous, and unhealthy. Many of the home floor plans are as small as three by three meters, and in the hillside communities may get no sun or ventilation throughout the day.

Recently, after heavy rains in Rio, two hundred people were killed instantly in one low-income community by a mudslide that engulfed their homes. The community had been built on a garbage dump. All our correspondents were clear that there are no places in the low- income communities that are healthy and safe for young children to play in except for inside some educational and religious institutions. All the other places where young children actually played were unhealthy and dangerous. The few paved streets are garbage ridden and contain open sewers, and the homes have illegal electric transmission wires hung over the flat roofs where children play.

These conditions produce high rates of respiratory disease, tuberculosis, leprosy and injuries. There is a massive underinvestment in primary care facilities, and children go untreated until their health conditions become severe.

Violence pervades many aspects of life in low-income communities, including commerce, education and simple daily tasks and routines. The violence in Rio favelas was captured in the film Cidade de Deus (City of God), although some residents and critics argue that the film exaggerated and ritualized the violence in the community.

As the research evidence mounts that early exposure to violence influences adult behavior and impacts early brain development, it becomes imperative to chart the reality of violence in low-income communities and to suggest ways in which it could be reduced. In Rio, community level violence has four major sources: the drug traffickers who control a number of the low-income communities; the informal militias composed of off- duty policemen who have organized themselves to oppose the traffickers but who inflict their own violence on people who oppose them; the “groups of exterminators” (grupos de exterminio) who kill for hire; and the various police forces who until quite recently “invaded” the low-income communities, killing indiscriminately. They did this when the favela violence spilled out into middle-income neighborhoods.

There are a number of ways to illustrate the appallingly high rates of violence in low-income communities in urbanBrazil. Adolescent deaths from homicides are an all too vivid reminder of what faces the current generation of zero to eight year olds if the levels of violence are not reduced. In 2006, 3,424 adolescents between the ages of twelve and nineteen were murdered in Rio de Janeiro – a rate of 4.9 per 1,000 adolescents in that age group.1 In Sao Paulo, a much larger city, the total number of young people who died from homicide in the same year was 1,992, a rate of 1.4 per 1,000. To put homicide rates in international perspective, the rate of homicides for all ages per 1,000 inhabitants (latest figures available for each country) are 0.0088 inGermany, 0.0382 in thePhilippines, 0.054 in theUnited States, 0.58 inVenezuela, and 0.25 in Brazil.2

Recently, unprecedented cooperation between the federal, state and city governments produced the first ever scheme to bring regular order to a few favelas. The scheme is called UPP, or police peace-keeping units, and involves a heavy “invasion” to chase out drug traffickers followed by systematic attempts at community policing, While the scheme is currently only operational in eight of Rio’s over 1,000 favelas, it has been received with cautious optimism by residents and has produced some striking indicators of success. 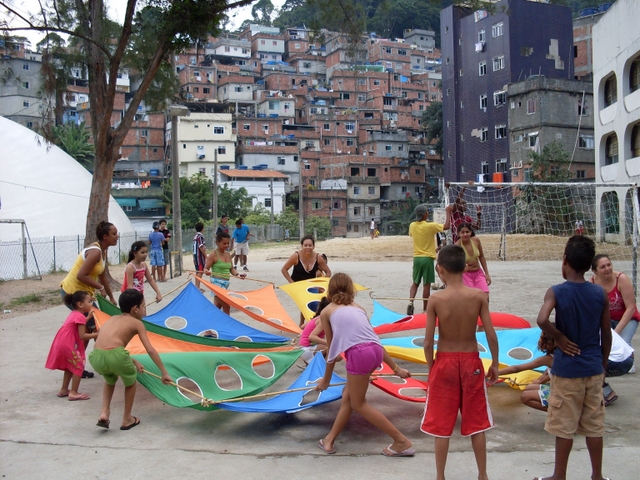 One key to reducing the impact of violence on their lives is constructing and protecting safe places in the community where they can play outside of their homes. Photo: Courtesy CIESPI

Parents in low-incomes families in Brazil are likely to have had a low level of education. While rates of basic as opposed to functional illiteracy have been declining rapidly, low-income populations still have low levels of years of schooling. However eager parents are to see their children succeed, they may not have the resources and knowledge to maximize their children’s development by effective practices in the home. Long commutes to work on very inadequate public transportation also mean that some parents only see their children at the weekend.

While there is increasing interest, and indeed a federal mandate, to provide pre-school education to all in Brazil, few of our respondents talked about the earliest years of life when most infants and young children stay at home. This lack of information or even interest in the infant years may reflect a premise that child development strategies and programmes are only relevant to children three years of age or older, or a lack of knowledge or interest in strategies to assist younger children.

Despite the mandate for pre-school, many low-income communities do not have enough places in public pre-schools and many of the existing places are only half-day programmes. Working parents often have to lock their very young children in their homes during the unsupervised hours. In Brazil, the chances of attending pre-school are mediated by income. A recent report on schooling showed that 11.5% of the poorest children aged zero to three went to crèches, compared with 37.7% of the 20% wealthiest children.6 Both percentages increased dramatically for children aged four to five; those figures were 64.5% of the poorest 20% of children versus 94.2% of the wealthiest children.7

While only a few parents can afford the cost of private crèches, the municipality of Rio provides grants to some private crèches to subsidize poorer children. Some of our respondents saw a huge difference in quality between public and private crèches and pre-schools, based in part on the fact that private facilities may have a staff student ratio of 1-15 compared with as few as 1-40 in the public sector. There are also serious concerns about the quality of early childhood facility staff. Both public and private facilities report serious difficulties recruiting and retaining trained staff.

A number of non-profit and public organisations provide cultural, educational, and leisure programming for young children, but these groups have very few resources and simply cannot meet the demand. 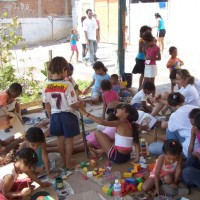 Ato Cidadão (Citizen Act) works with the Project Estação Atitude Cidadã in communities of São Paulo where children are especially at risk. Together they support the creation, organisation and consolidation… Read more Read full ECM article
A view from the Netherlands: The status of children in local government spatial planning 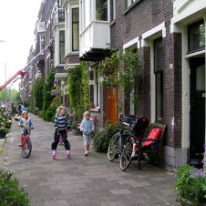 This article describes spatial planning processes at local government level in the Netherlands in relation to opportunities for children to play and explore the outdoors close to home: in their… Read more Read full ECM article