Many of the Sustainable Development Goals are relevant to the aim of ending violence against young children. A new partnership, with a secretariat housed at UNICEF, is seeking to capitalise on this momentum – and on growing appreciation of the toxic effects of violence on the developing mind. This article explores current research and data, introduces the partnership and explains how people entities from around the world can get involved.

There are few, if any, studies specific to the experience of violence in the prenatal to 5-year-old period of childhood. What we do know is that globally, according to a recent journal article in Pediatrics, one billion children between the ages of 2 and 17 have experienced violence in the past year (Hillis et al., 2016). Clearly, a percentage of these are children under 5 years of age, and one suspects that an analysis, for example, of violent discipline would yield some disturbing findings for children in the under-5 category. A sub-set of that analysis would also show that a higher percentage of children living with disabilities than those without would experience violent discipline (UNICEF, 2014b). 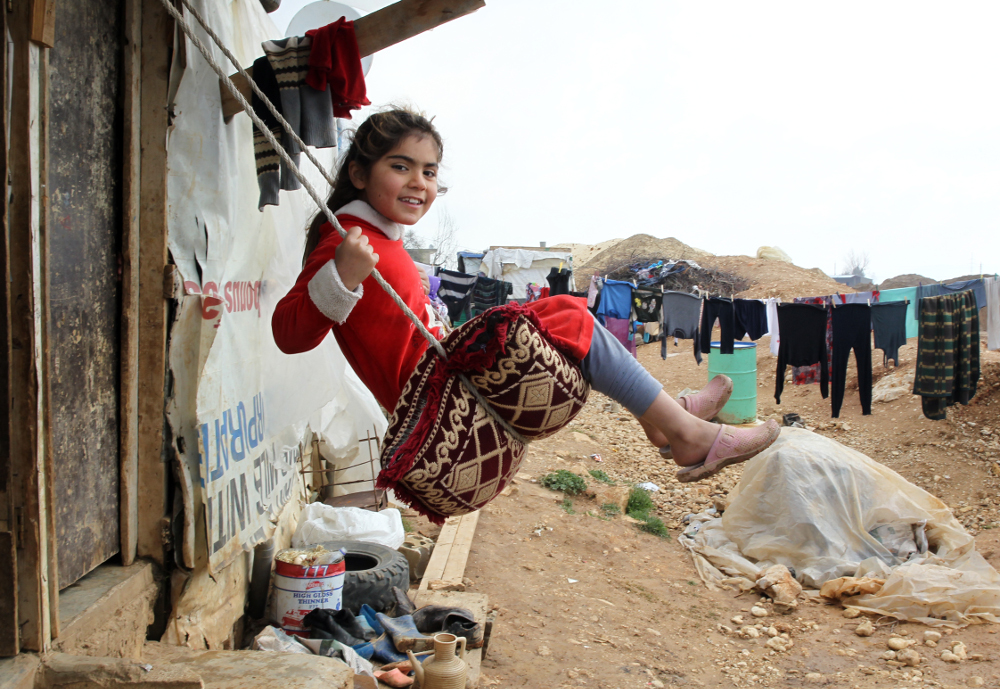 According to the Multiple Indicator Cluster Survey (MICS), violent forms of discipline are extremely common. In nearly all the countries surveyed more than half of 2 to 4 year olds are subjected to violent forms of discipline (UNICEF, 2012). The percentage ranges from 41% in Bosnia and Herzegovina to 94% in Vietnam. The MICS indicates that the number of young children experiencing violence in and across countries is alarming (see Figure 1).

Desmond Runyan, Executive Director of the Kempe Center for the Prevention and Treatment of Child Abuse and Neglect, has researched child abuse for over 30 years. His research has focused on the identification and consequences of child abuse and neglect, especially in babies and young children. For example, one of Runyan’s studies concluded that neglect in the first two years of a child’s life is significantly associated with later childhood aggression (Kotch et al., 2008). There are other important pieces of research in this field, and much emerging work on the effects of toxic stress in early childhood, which directly affects brain architecture and leads to lifelong problems in ‘learning, behavior, and both physical and mental health’ (National Scientific Council on the Developing Child, 2007). 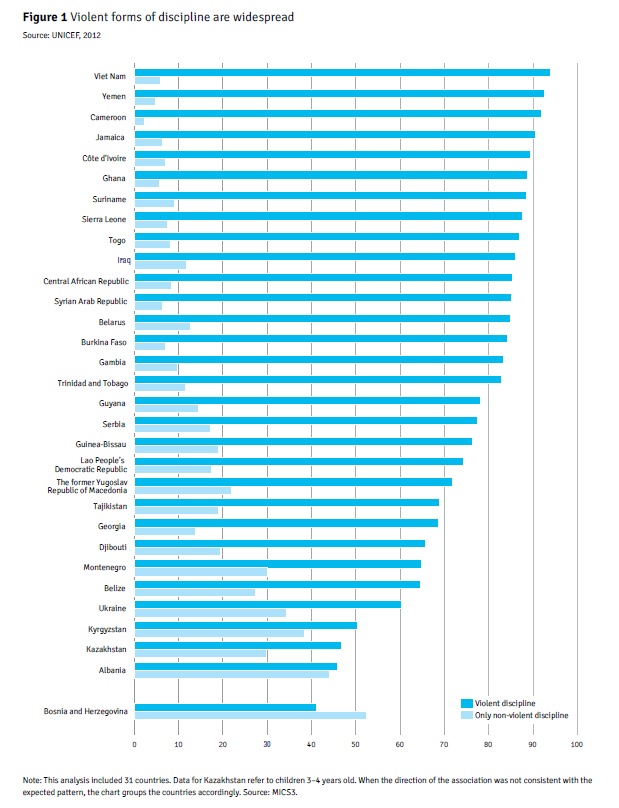 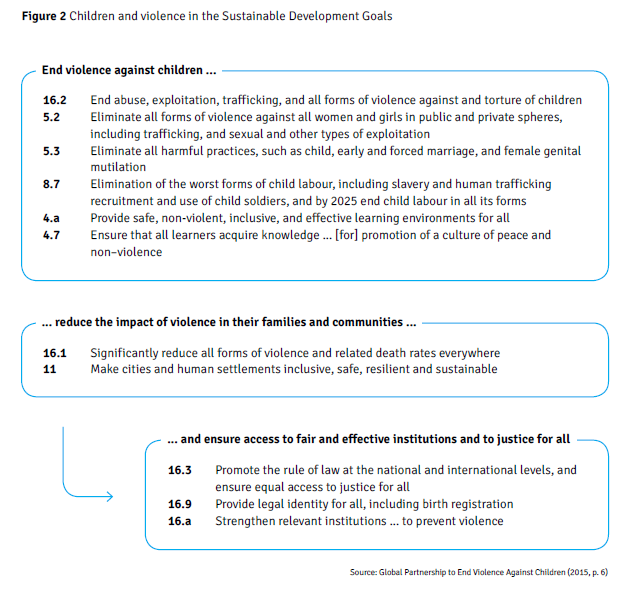 The Partnership has three specific objectives:

Being rights-focused, inclusive and transparent, the Partnership intends to have a lifespan that accompanies Agenda 2030, and currently has a strategy to guide its first five years (Global Partnership to End Violence Against Children, 2015, p. 6).

Stakeholders in the Partnership include civil society organisations, foundations, the private sector, governments, academics and researchers, UN agencies, leaders of the faith-based community, and young people themselves. A Secretariat, housed in UNICEF Headquarters in New York, is staffed with secondments from civil society, government and UNICEF-supported experts, and consultant advisors on strategy, governance, and measurement. While the work of the Partnership is nascent, that it has generated considerable civil society, UN and governmental interest is suggestive of an overall ‘heightened awareness’ that violence against children is, indeed, a grave concern. It also suggests there is political will to achieve – and a demand for – real and sustainable change in societies the world over.

While it is difficult to note precisely what the potential impacts of the Partnership will be on the lives of children in the prenatal to 5 years age group, the set of strategies the Partnership will endorse and promote will most certainly have an effect on these children, and their families. The World Health Organization (WHO) is leading the development of this package of interventions, and they merit closer examination, thinking particularly about very young children. INSPIRE – Seven Strategies for Ending Violence Against Children, developed by the WHO and
core partners, including UNICEF, will include seven building blocks (Figure 3). Notably, the WHO-led work builds on the THRIVES package of measures (Hillis et al., 2015), the recommendations of the Special Representative of the Secretary- General on Violence against children (Office of the Special Representative of the Secretary-General on Violence Against Children, 2013), UNICEF’s (2014a) recommended six strategies, and the work of civil society organisations that are at the forefront of efforts to prevent violence against children and help victims.

How people can get involved

At the global level, the Partnership will focus on building political will to end violence against children and make violence prevention a priority. It will also serve as a catalyst for expanding the movement to end violence, based on an understanding that there must be a change in the attitudes and social norms that tolerate violence. This can be done at all levels, but importantly the real ‘movement building’ will take place in communities all over the world, ideally with young people active and engaged. Civil society will be a key part of the movement we hope to ignite. That is a good way for everyone to get involved.

The Partnership has published its zero draft strategy, introducing the concept of ‘pathfinder’ countries. These are places where there is a demonstrated strong commitment to accelerating efforts to make children safe. In pathfinding countries, for example, partners will provide technical support to a whole-of- government approach to violence prevention. This will involve the development of a road map for implementation of the package of evidence-based solutions, and a national commitment to increased financing. The Partnership will create
a platform for ‘live’ knowledge sharing across countries. Catalytic funding from an associated Trust Fund will be provided, where possible. Pathfinders – of all income levels and spread across the globe – will act as the bedrock of the Partnership. They will be demonstrating that violence can be prevented. Pathfinders will both innovate and scale-up interventions.

In 2017 – most likely in the fourth quarter – the Partnership will host a ‘solutions summit’. Pathfinders will share experiences of what is working,
and what the challenges are. From that point the Partnership will continue to strengthen online and other knowledge-sharing means. New pathfinders may emerge. There have already been questions about regional bodies such as the Global Movement for Children in Latin America, and the South Asia Initiative to End Violence Against Children in South Asia, becoming pathfinders. Cities are asking about the possibility of pathfinder cities.

As a global platform for advocacy, the Partnership will use its convening power to help to expand the global movement against violence both within and between countries. There are many efforts in existence to protect children – Together for Girls, Girls Not Brides, the movement to end female genital mutilation/cutting, and the Global Alliance for Children, to name but a few. The Partnership will work with these, build on their strengths, and fortify an unstoppable force for change in the lives of millions of children the world over.

All governments, NGOs, foundations and other entities can be part of this Partnership in different ways. Supporting the ‘call to action’ that will take place in July 2016, endorsing the package of interventions, and embracing the principles of the Partnership are all ways to engage.

Agenda 2030 is for us all and the Partnership is a test case for its universality.

"‘The Partnership will serve as a catalyst for expanding the movement to end violence, based on an understanding that there must be a change in the attitudes and social norms that tolerate violence.’"