Since the 1990 World Summit on Children, the global community has made significant progress in recognising the need to nurture child development – but we remain far from ensuring that all children develop optimally and start school-based learning ready to benefit from it. (Indeed, worldwide, not all 5–6 year olds yet have a school to go to.) In the late 1990s, the science of epidemiology informed the idea that, to improve children’s learning as they enter school, communities and governments should monitor the developmental status of all children, not just those at risk. Reliable monitoring, combined with sustainable measurement and reporting, creates the knowledge to shape universal measures while also targeting interventions to benefit specific groups of at-risk children (Offord et al., 1998).

The Early Development Instrument (EDI) (Janus and Offord, 2007) was purposefully created for population-level monitoring. The EDI is completed by teachers (although a parent version is possible), which enables a near-population coverage, simplifies the process of training, and captures information about children’s behaviours and skills in a social setting. Teachers’ observations are a more feasible way than direct tests to acquire data in areas such as social and emotional development. Covering five major developmental areas ensures that the EDI’s snapshot of the child’s developmental status is holistic and comprehensive. As data are collected for all children enrolled in kindergarten, results can detect patterns and differences that could be obscured if specific samples were targeted for assessment.

The EDI was developed at the Offord Centre for Child Studies, at McMaster University in Hamilton, Ontario, in Canada in 1998. The goal was to create a feasible, acceptable, and psychometrically sound measurement instrument to assess the holistic developmental health of children in a school environment prior to entering Grade 1. Researchers, clinicians, educators, and community leaders contributed to the development and validation of the measure, setting the standard for subsequent adaptations in other countries. The name ‘Early Development Instrument: A Population-based Measure for Communities’ was chosen to emphasise its focus – early development – and the goal of monitoring all children in communities. 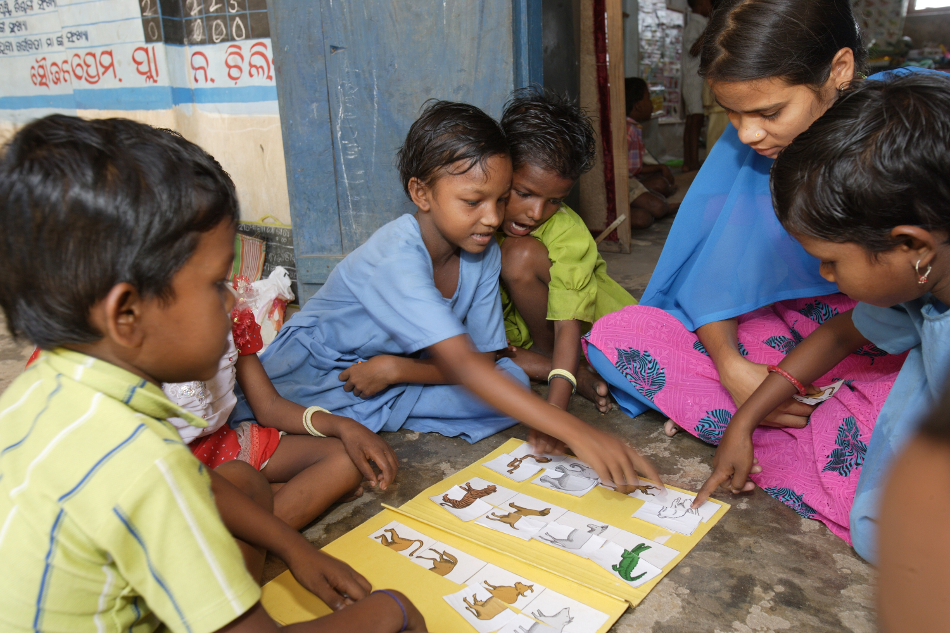 Characteristics of the EDI

The EDI (Janus and Offord, 2007) is a checklist of 103 items, completed by teachers and easy to administer, that measures children’s developmental health at school entry in five major domains of development: physical health and well-being; social competence; emotional maturity; language and cognitive development; and communication skills and general knowledge. The five domains are broken down into 16 sub-domains, representing specific skills and behaviours (see Table 1). An EDI guide, accompanying the instrument, was developed to facilitate interpretation of questions and shorten completion time. The EDI is also used to measure children’s readiness to learn at school: there
is adequate evidence in the literature to suggest that each domain in the EDI has an important impact on children’s adjustment to school, as well as their short- or long-term school achievement. The questionnaire takes between 7 and 20 minutes to complete, generally in the second half of the kindergarten year, to give teachers the opportunity to get to know the children in their class. 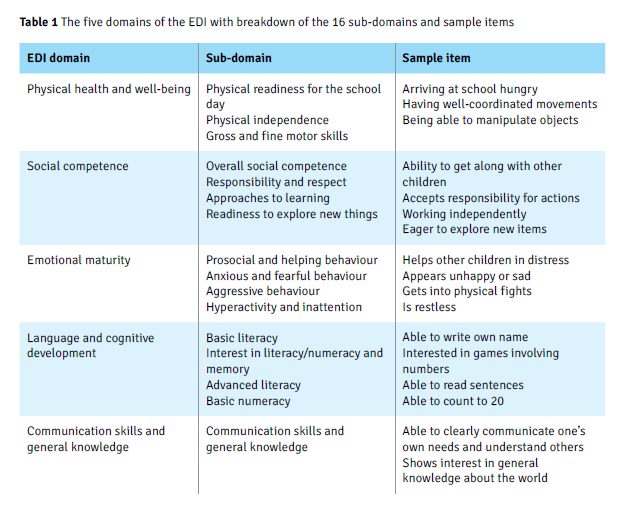 The EDI complies with all psychometric requirements to be reliable at an individual level, and can be used in project evaluation and research studies. Nevertheless, whether a questionnaire is completed for each individual child in a given class or in a selected sample, interpretation is intended to occur only at a group level, based on the analyses of all children and with reference to the distribution of all scores. In population-focused implementations, the scores are aggregated to the school, neighbourhood, region, or country level. In this way, once collected, the EDI data can be linked with other population and community data (for example, Cushon et al., 2011; Brownell et al., 2016) or presented graphically as maps.

The major advantage of the EDI is its combination of several domains of child development into one comprehensive instrument. Questions are based on behaviours and skills easily observable in a school setting, and responses are rated based on observed frequency of behaviours or presence of skills, rather than on the child’s performance in relation to a specific group. The EDI’s simplicity, ease of use, and low cost all facilitate community-wide implementations, enabling a true picture of early child development and, especially in conjunction with other locally relevant data, allowing for useful recommendations and providing a baseline for future assessments of progress.

Testing of the EDI

The EDI’s psychometric properties have been examined extensively over the years. For instance, the internal consistency of the EDI domains in the original Canadian sample varied from 0.84 to 0.94 (Janus and Offord, 2007). Since then, investigations of every international adaptation have generally found similar values: an international comparison of samples from Canada, Australia, Jamaica, and the USA ranged from 0.64 to 0.92 (Janus et al., 2011). Test–retest reliabilities have also been studied, and found to range from 0.8 to 0.9 (Janus et al., 2007). Teacher ratings on the EDI have been found to be associated with parent ratings, relevant direct assessments, assessments in later ages or grades, and family and neighbourhood socioeconomic status (Forget-Dubois et al., 2007; Janus and Duku, 2007; Lloyd and Hertzman, 2009). Similar work has been carried out for international versions of the EDI adapted for use in Australia (Brinkman et al., 2007), Hong Kong (Ip et al., 2013), Scotland (Geddes et al., 2014), Sweden (Hagquist and Hellstrom, 2014), Ireland (Curtin et al., 2013), Brazil and Peru (Janus et al., 2014), and Indonesia and the Philippines (Duku et al., 2015). Cross-country investigations can add to our knowledge about which developmental patterns are universal versus context-dependent. The EDI has also undergone extensive evaluation in indigenous populations (for example, Brinkman et al., 2009; Silburn et al., 2009; Muhajarine et al., 2011) and for language learners (for example, Guhn et al., 2007; Tazi, 2015).

The EDI’s predictive validity has been explored in Canada and Australia, where it has been used the longest (Brinkman et al., 2013; Davies et al., 2016; Guhn et al., 2016). In both countries, higher numbers of vulnerabilities across the five domains predicted greater probability of failure to achieve basic academic competencies by Grades 3, 4 and even later. The social and emotional domains of the EDI strongly predicted children’s emotional well-being and peer relationships at age 10 (Guhn et al., 2016).

"‘The major advantage of the EDI is its combination of several domains of child development into one comprehensive instrument.’"

Use of the EDI

As of 2015, the EDI has been completed for over 1,000,000 children across Canada. In some provinces it is completed regularly, with results informing governments’ early childhood policies. In Ontario, for example, EDI results – collected once every three years – are among the 11 indicators used for the Poverty Reduction Strategy for 2014 to 2019 (Government of Ontario, 2014). Several provinces, such as British Columbia, Manitoba and Nova Scotia, use EDI data to allocate resources or shift the focus of support – often through mapping of results overlaid with data on available resources or sociodemographics. Some areas collect complementary data from parents to learn about children’s preschool history and environment.

International use of the EDI started in 2002 in Australia, which also became the first country to implement it in a census-like manner, every three years, with federal funding. (In Canada, EDI implementation is led at a provincial level.) An infrastructure was created to support community use of the data with state-level coordinators. The Innocenti Report Card 11 (UNICEF Office of Research, 2013) suggested (p. 39) that the Canadian and Australian approach to monitoring children’s development with the EDI was, above all, a way to raise community awareness and mobilise community resources to support every child’s development in the early years:

The EDI has now been adapted for use in more than 20 countries including Ireland, the USA, Scotland, Jamaica, and Australia (English); Peru, Chile and Mexico (Spanish); Brazil and Mozambique (Portuguese); Vietnam (Vietnamese); Hong Kong and China (Mandarin); Sweden (Swedish); Estonia (Estonian); Kosovo (Albanian); Kyrgyzstan (Kyrgyz and Russian); Indonesia (Bahasa); Philippines (Tagalog); South Korea (Korean); and Jordan (Arabic), for purposes ranging from small-scale pilots to research studies to national monitoring. Further adaptations are ongoing. A standard protocol has been established for adaptation in each new setting to ascertain the reliability and validity of the adapted instrument and ensure comparability of results.

The most effective use of EDI child development data is in long-term evaluation of programmes or reforms in preschool/kindergarten provision. Repeated implementations for populations – rather than samples – of children ensure the opportunity for monitoring and correction of course, both at the policy level and at the community, school or neighbourhood level.

The EDI has proved to be a reliable instrument, suitable for many countries and cultures. Through its various implementations and adaptations, we have shown it is possible to meaningfully adapt, implement and use the results of a measurement of early development. Since the EDI was developed, a number of new worldwide initiatives have been established to address the measurement of children’s development, most recently in the context of the new Sustainable Development Goals. We hope that the EDI’s philosophy and conceptual framework are helping to translate the increasingly recognised need to monitor children’s development into a widespread reality.

"The most effective use of EDI child development data is in long-term evaluation of programmes or reforms in preschool/ kindergarten provision.’"