In its work at regional level within the EU, the Bernard van Leer Foundation focuses on Roma populations, who across Europe face higher risks of discrimination and difficult living conditions. Catalina Ulrich of the University of Bucharest recently produced a report for the Foundation entitled ‘Research findings and best models of intervention supporting Early Childhood Development for young Roma children’. In this article she discusses her different experiences of working with Roma children in urban settings compared to rural ones.

Compared to the general population, the Roma remain a more rural people: in Bulgaria, for example, only around half of Roma live in urban areas, compared to over two-thirds of the general population. Unfortunately, few other hard statistics exist. Information on Roma living conditions and poverty are scant, fragmented, and often anecdotal. Research on Roma housing, health and access to educational and care services is still very limited. Until more studies are done specifically addressing the needs of Roma children in an urban context, observations can be offered only on personal experience.

From my research with Roma populations in rural and urban areas of Romania and Bulgaria, some differences in the experiences of young Roma children are clear. Rural settlements tend to be isolated and young children tend to be shy, with little exposure to the wider world – many have never been on a bus, or traveled to the next village. In cities, by contrast, it is not uncommon to see Roma children displaying exceptionally precocious social intelligence to solicit food or money, an activity which requires a range of social skills: assertiveness, persuasiveness, the ability to read people. For example, I once watched as an urban Roma girl of five or six confidently approached a beautiful blond woman and complimented her on her looks, saying that she has a Barbie doll at home who looks just like her.

Observe the same children in a primary classroom, however, and they are likely to display none of the same confidence. The inadequacies of the formal education system in including Roma children are well documented, and among the ways they fail Roma children is through not nurturing and giving a positive direction to the streetwise skills developed outside the classroom.

In general, Roma children in urban areas tend to appear less secure than their counterparts in rural settlements, where the sense of close-knit community protection and solidarity tends to be stronger. Raising children is traditionally seen by the Roma as the responsibility of the whole community, with the child occupying a central place in the social and cultural world and afforded an adult respect from an early age. As Charlemagne (1983) notes, “Children live in a climate of freedom within the extended family, where affective warmth and permissiveness dominate… The Gypsy child lives in a community which supports and reinforces his sense of belonging”.

However, in urban areas these traditional family roles tend to weaken and break. Why is this? Part of the reason has to do with the wider reach of media in urban areas gradually diluting and undermining the traditional culture and ways of life. Satellite TV has yet to penetrate many poor and isolated rural Roma settlements, but it is common to see a satellite dish outside every apartment in urban Roma areas. Soap operas are especially popular, as demonstrated by how many babies in Roma communities are named after their leading characters. In urban Roma populations with a higher penetration of media, I observe that conspicuous consumption is more noticeable and childhoods appear shorter, with children dressing like mini-adults from a young age.

An even more significant influence on the breakdown of Roma community spirit in urban areas is, however, the impact of housing. The quality of housing for the Roma in urban areas tends to be the worst: small apartments in the most poorly-constructed blocks, and overcrowded conditions with many family members living in a small space. While most Roma in cities tend to be found on the peripheries, some also live as squatters in city centers, occupying houses deemed legally unfit for human occupation and subject always to the threat of removal through litigation.

It’s true of course that housing is also likely to be cramped and poor quality in rural Roma settlements: a 2004 UNDP survey in Bulgaria showed that on average Roma lived in 0.76 rooms per household member (compared to a population average of 1.58), while the average size of Roma housing units was 15m2 (compared to 34m2). But an advantage of rural areas, at least when it comes to preserving traditional community relationships, is that villages tend to provide more communal spaces in which extended family members can meet and interact.

Cases of particularly bad housing conditions and lack of infrastructure for the Roma can be observed throughout the EU. For example, in a city in Greece, according to a 2007 media report, around 350 Roma families lived in tin shacks served by two water outlets; 60 of their children were hospitalized in November 2007 with Hepatitis A. The FRA report ‘Housing conditions of Roma and Travelers in the European Union’(2009) details the discrimination Roma peoples face in access to housing, poor housing conditions, segregation and forced evictions.

Action to remedy the poor quality of Roma housing is badly needed but tends not to be found acceptable by the general public: efforts to relocate the Greek families into nearby areas, for example, were opposed by non-Roma local residents. It is common for the public to want assistance to the Roma to focus instead on the education of the young generation or employment for their parents, rather than improving conditions of housing.

This is unfortunate as it fails to recognize that housing conditions have a negative impact on a child’s education, health and employment prospects, prolonging the cycle of deprivation and social exclusion. Miloon Kothari, un Special Rapporteur on the Right to Adequate Housing, states: “in its essence, housing as a living impulse creates roots, entailing security. The house is to be seen as a home, the one stable point in the child’s life where she/he can return to. It is a place where the child can eat, laugh, play — where she/he will find love and peace.” 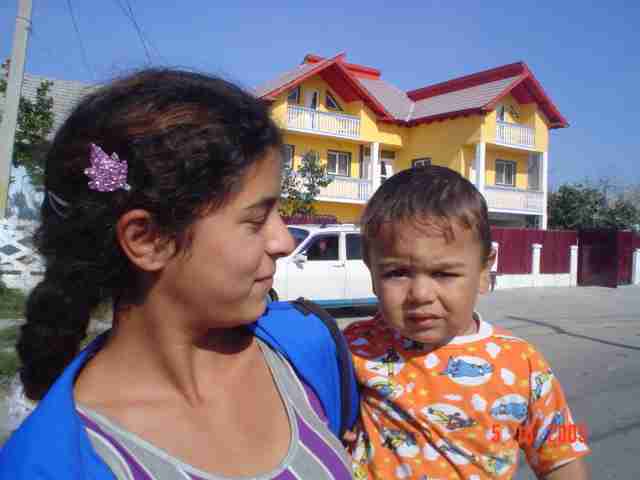 In the basics of access to services, Roma in urban areas tend to be better off. Photo: Catalina Ulrich

Many Roma communities in cities are segregated from non-Roma, if not quite ghettoized, and this has also been shown to negatively affects employment chances, access to and attainment in education, health and access to health care. UNDP research in Slovakia shows that the worst education structure was found amongst the inhabitants of segregated settlements. In these communities there was a much higher rate of incomplete primary education (up to 44.2%) than for Roma living in mixed settlements (23.5 %). Segregated- settlement inhabitants were much less likely to have completed primary and especially secondary education (8.5% compared with 18-19%).

The advantages and opportunities of urban settings

Despite the living conditions being more challenging in some ways, the Roma people are not immune to the global trend towards urbanization: they, like others, are much more likely to be attracted from rural areas to cities than to want to relocate from cities to the villages. Rural Roma settlements are often far from health services and schools, over bad roads and with no public transport, lacking in infrastructure such as sewerage and clean water. In these basics of access to services, Roma in urban areas tend to be better off – although an exception, in Romania, at least is that kindergartens tend to be so oversubscribed in urban areas that they can be easier to access in villages.

A number of policy initiatives offer the potential to improve conditions for urban Roma children. The Roma Education Fund’s ‘A Good Start’ project is expected to support 5,000 children from ages zero to six to access early childhood education and care services in 16 locations across four countries Hungary, Macedonia, Romania and Slovakia). In Sofia, the Health and Social Development Foundation (HESED) provide an alternative community based ecd service for socially disadvantaged children, with trained Roma outreach workers improving parenting skills of pregnant women and mothers of toddlers.

In Romania, Multifunctional Centers (CMS), implemented by the Step by Step Center for Education and Professional Development, and funded by UNICEF and ISSA, provide service irrespective of children’s social status, income, ethnicity and religion and focus on parent involvement, especially of the mother. The MCS were organized in existing crèches and in kindergartens where directors and representatives of local authorities were interested in changing the old system. In Bulgaria, the ‘Roma Educational inclusion through school improvement’ project (a collaboration of MATRA, Step by Step Program Foundation Bulgaria, SLO Netherlands Institute for Curriculum Development and educationalists from Romania) focused on effective transitions from preschool to primary school, by developing an inclusive school approach, individual educational approach and family involvement.

Finally, a programme focused specifically on urban areas is Fiecare Copil in Scoala (Every Child in School), provided by Ovidiu Rom, an NGO which advocates for national summer school preparation programmes for all low-income children age 5 and above. It provides free school materials, uniforms and hot lunches for children from low-income families, and its methodology encompasses neighborhood kindergarten and school registration drives, teacher training, summer and after-school programmes, family counseling and participation and incentives to parents for children’s attendance and achievement.

In conclusion, it is difficult to generalize about the experiences of Roma in urban as compared to rural settings, because both encompass such a wide range of conditions: in some villages discrimination is a serious problem, while in other villages there is integration between Roma and non-Roma people with children happily playing together. What can be said is that more research is needed, and that urban planning in European cities should not forget the Roma. 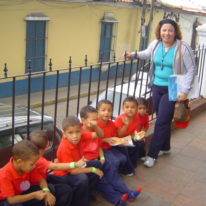 In an area of Caracas where street violence has become a normal part of everyday life, and where children grow up admiring and wanting to emulate the leaders of local… Read more Read full ECM article
Freeing children to contribute: Building child-friendly cities in the Asia Pacific region 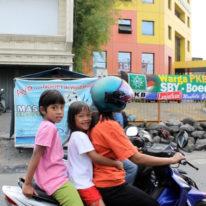 Large sections of many cities in the Asia-Pacific region are effectively out of bounds for children, whose freedom to explore their urban environments is limited by a lack of child-friendly… Read more Read full ECM article
Making Rotterdam child-friendly: “Cooperation and a wide-angle view are key” 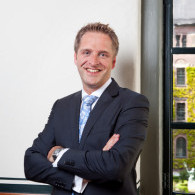 Rotterdam has a reputation within the Netherlands and beyond for its progressive approach to social policy and its focus on improving life for the city’s children – in particular the… Read more Read full ECM article
Inspiring slum children through education: a story from Delhi 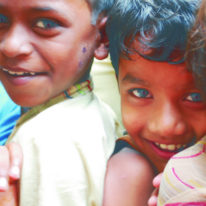 In a personal account of the 22 years since she set up Katha (which means ‘story’ in most Indian languages), Geeta Dharmarajan reflects on how education services can inspire children… Read more Read full ECM article
Children living in urban poverty: A global emergency, a low priority 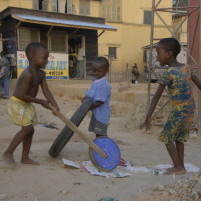 Among the world’s rapidly expanding urban populations, poverty is having catastrophic implications for millions of young children. However, in the context of good governance and well supported grassroots organizations, urban… Read more Read full ECM article
Hope for the children of Juarez 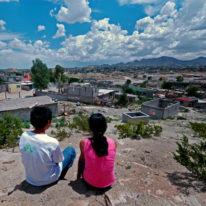 As the new ‘ground zero’ in the war on drugs – and the homicide capital of the world – Ciudad Juarez in Mexico is a challenging place in which to… Read more Read full ECM article
A safe passage to adulthood: Reaching slum children through women-led savings 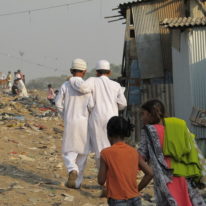