‘Criança Feliz’: A programme to break the cycle of poverty and reduce the inequality in Brazil

Is it possible to implement a programme for early childhood development in a short time frame, particularly one designed for comprehensive child development, in a continental country such as Brazil, with 27 states and 5570 municipalities? Through the ‘Criança Feliz’ (‘Happy Child’) programme, we have been gradually learning that it is.

Brazil has over 207 million people and about 11% of those are young children under the age of 6 – and about 42% of them are from families with monthly incomes below the poverty line (Instituto Brasileiro de Geografia e Estatística (IBGE), 2017). Over the last 30 years, the country has witnessed a growing movement on behalf of early childhood. Decentralised social policies have had a significant impact on reducing child mortality. An important legal framework has taken shape: the Federal Constitution of 1988, the 1990 Child and Adolescent Statute, and the 2016 Legal Framework for Early Childhood, aimed at guaranteeing the rights of children.

‘Criança Feliz’ was instituted on 5 October 2016, through a presidential decree, to promote comprehensive development of children in their early years. Nine months later, on 14 July 2017, the programme’s first home visit was officially recorded, in Pacatuba Town in the State of Sergipe.

Given the need to overcome inequalities in Brazil, the Ministry of Social Development (MDS) chose to prioritise the most vulnerable families – those served by the income transfer programme ‘Bolsa Família’.

While coordinated by the National Secretariat for the Promotion of Human Development (SNPDH), within the MDS, the implementation of Criança Feliz is developed by states and municipalities. At each of the three levels of government – federal, state and municipal – the programme has an intersectoral steering committee and a technical group, alongside a coordinating body. The national level is responsible for coordinating national actions, supporting states, and formulating training strategies. States are responsible for implementation in their area, awareness-raising initiatives, mobilising and training municipal supervisors, and monitoring. Municipalities are responsible for implementing the programme at local level: training home visitors, planning visits, supervising the field work, and monitoring and assessing the visits.

The programme had a budget of about USD 98 million for 2017, rising to a projected USD 167 million in 2018. The federal government transfers funds to the states, through the National Social Assistance Fund, to cover training, expenses, and transfers to each municipality: R$ 75 (about USD 23) per month per visited individual, provided that home visitors follow the rules regarding number of visits per month. Home visitors must have at least high school degrees. In a cascading capacity-building strategy, they are trained by municipal-level supervisors, who in turn are trained by the so-called state-level multipliers – in both cases, these supervisors require college degrees, and the state-level multipliers are trained by the national technicians. Each municipal supervisor is responsible for up to 15 home visitors, and each home visitor can attend to up to 30 children or pregnant women. Supervisors are paid an average of USD 609 per month, and home visitors USD 318 per month. To put that into context, Brazil’s average wage is around
USD 655 and the minimum wage is USD 228.

Criança Feliz ultimately aims to reach 3 million children and 640,000 pregnant women, including 75,000 children with disabilities and 8600 children under special protection measures. Of these, around 738,000 children should be reached by December 2018, in phase one; and 1.5 million by the end of 2019, in phase two. 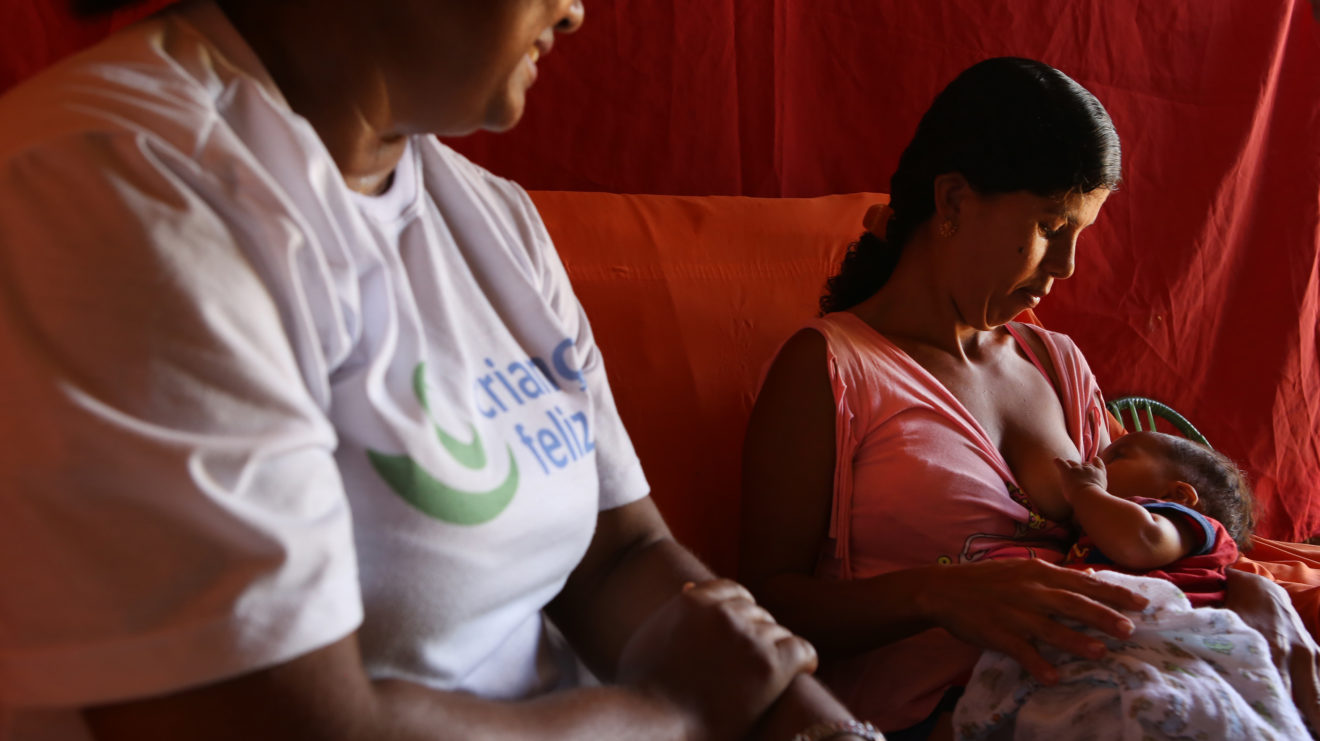 At the time of writing, the programme has been in existence for 16 months. Most of the training at the state level was carried out from February to June 2017. Of the country’s 27 federal units (comprising 26 states and the federal district), 25 enrolled in the programme. Of the 5570 municipalities, 2614 had joined by January 2018. Of those, 1856 had started conducting home visits, involving 185,910 children and 26,383 pregnant women. Figures 1 and 2 show how programme implementation has advanced, by number of municipalities that initiated the visits and by individuals reached, respectively.

What factors were most significant in reaching such a scale in a relatively short time? The approval of the Early Childhood Legal Framework paved the way for the Presidential Decree creating the programme. In both cases political leadership was key, with significant involvement of the Parliamentary Front for Early Childhood. One of its leading figures and an author of the bill creating the framework, Osmar Terra, became Minister for Social Development and made Criança Feliz a priority. As the Minister stated: ‘In the first thousand days of life, transformations happen in the brain which make this the most extraordinary period of the whole cycle of life. During this time the basic skills for learning about the world we live in are formed.’

Awareness raising and mobilisation were fundamental: the nationwide launch was followed by state and local events, with the participation of governors and city officials. So was the involvement of different sectors at three levels of government: health, education, culture, social assistance and human rights. The programme also had the support of national and international partners, including the Bernard van Leer Foundation, the Maria Cecília Souto Vidigal Foundation, PAHO and WHO, the Better Early Childhood programme (‘Primeira Infância Melhor’), UNICEF, United Nations Educational, Scientific and Cultural Organization (UNESCO), United Nations Development Programme (UNDP) and the Institute of Education and Research (INSPER). Among other things, these partners supported the development of technical material and the training methodology, as well as contributing to the monitoring of the programme and its evaluation: starting a programme of this magnitude makes sense only if these are fully defined and prepared. For instance, the Bernard van Leer Foundation’s support was crucial to the beginning of capacity building of state coordinators.

Technology was also put to good use. A computerised platform was established to facilitate states and municipalities enrolling in the programme, which requires the approval of the local social welfare council. Implementation monitoring has been carried out daily and weekly, with the use of a computerised system called Prontuário SUAS. WhatsApp has proved extremely useful for national, state and municipal coordinators, home visitors and supervisors to keep in contact and exchange experiences, documents, photos and videos; it is also a stimulating, motivating and strengthening factor for interaction among government bodies, humanising the implementation of the programme.

It is important to constantly follow up on implementation, to monitor intersectoral indicators, and to assess the programme itself, in order to identify opportunities for continuous improvement. Beyond this, at the end of its first year of implementation we can identify several notable challenges:

For Criança Feliz to ensure political support and financial resources for the coming years, it is necessary to constantly invest in informing and mobilising institutions, families and society at large for everyone to recognise the importance of promoting early childhood development.