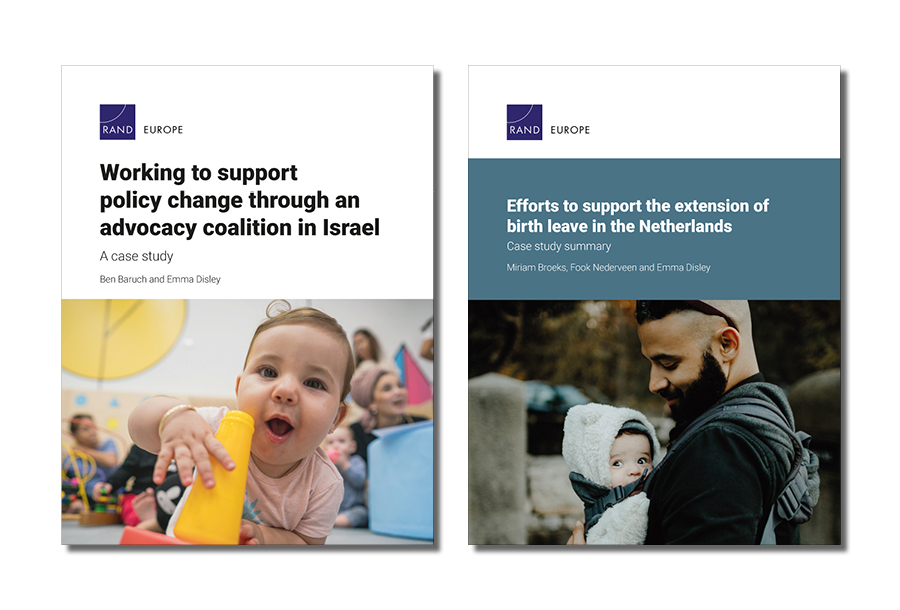 Both Israel and the Netherlands celebrated legislative breakthroughs in 2018.

Prior to 2018, Israel had no formal legislation or government agency responsible for early childhood care and education needs. However, the new Supervision Law, passed by the Israeli Knesset in July 2018, set out to improve the supervision of daycare services for children under 3 years by creating regularised standards relating to staff training and the physical environment in daycares.

Through the new WIEG law, the Netherlands secured paid birth leave for partners of mothers.  From January 2019, the new policy provides those within formal employment with five days of fully paid partner leave. This will be extended to five weeks of nontransferable partner leave paid at 70 per cent of normal pay from July 2020 onwards.

In both cases, strong alliances were forged to support policy change. These case studies map the impact and value of such coalitions and draw out the key characteristics which contributed to success.

Israel case study on the Coalition for Education from Birth documents how ANU and the Bernard van Leer Foundation, together with 250 members, campaigned for several policy changes to improve the care, safety and education for children under 3 years old.

“The case studies tell the story of two projects, supported by the Bernard van Leer Foundation, that successfully contributed to national legislative changes. They capture the process of building and maintaining broad-based partnerships that united diverse voices for a common cause – offering lessons for other organisations seeking to forge similar links in pursuit of legislative reform. The cases also offer insights for organisations funding and supporting such partnerships. Outlining the facilitators and possible barriers to achieving the desired changes, the case studies have the potential to inform current and future work to improve early child development policy and practice.” Miriam Broeks and Ben Baruch, Researchers, RAND Europe.

These case studies also form part of the Scaling Partnerships series, which provides detailed insights on the steps taken to achieve effective early childhood development policies and practices. Further case study publications in this series will be released later this year.

"The collaboration between the Bernard van Leer Foundation and RAND Europe on documenting these processes aims to highlight the importance of collective action on the journey towards achieving sustainable social change for babies, toddlers, and their caregivers. The ambition is that these cases will contribute to the growing knowledge around what works (and what does not) in scaling early years interventions successfully."
– Irina Ivan, Lead Learning to Scale, Bernard van Leer Foundation
"These case studies are of great value to anyone aiming to create sustainable change in society. They also help us to reflect and learn from our work. Enabling the foundation and its partners to further improve our strategy and impact for babies, toddlers and the people who care for them."
- Leontien Peeters, Representative the Netherlands, Bernard van Leer Foundation
"The case study of the Education from Birth Coalition in Israel tells the story of how new actors and approaches can work to unite diverse members to bring about meaningful change in the lives of babies and toddlers on a national scale.  It also provides unique insight into the potential of philanthropic organisations to support civic actors to build effective policy advocacy campaigns on important social issues.  We hope that the lessons distilled in this case will help to inform and inspire other efforts in Israel and around the world."
– Daniella Ben-Attar, Representative Israel, Bernard van Leer Foundation