Contributing to a better world by sparking true conversations is Agnita’s personal mission in her professional work as an organisational consultant and HR professional. As the Foundation’s Director of People and Culture she is very happy to support all our team members to fully contribute to our mission. Her approach can be recognised by compassion for people, creating positive movement and a systemic perspective.

Agnita grew up on a boat, sailing around the world with her parents and sister. Her mother is a teacher, and her father a merchant shipping captain who insisted that his family come along on his travels. Her childhood taught her to look at people and situations with an open mind. She easily finds her way in different organisational cultures.

From 1995 to 1999 Agnita studied Public Administration at the Erasmus University Rotterdam, specialising in change management. Agnita has since been involved in many organisational changes. From 2007 to 2022 she worked as an entrepreneur, running her own consultancy business. Agnita’s first encounter with Bernard van Leer Foundation was in 2013, when she supported maximising the team’s potential by implementing changes in the Foundation’s way of working.

After living in the centre of Rotterdam for years, Agnita moved to a village just south of Rotterdam in 2010. She is married to Marnix and mother of two daughters. Agnita loves being outdoors and practices yoga. She feels blessed to be able to live in line with what is true to her: connectivity, creativity and personal development. 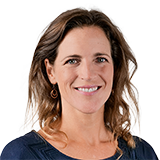