Senior Advisor to the CEO

Cecilia (@CecyVacaJones) is a Senior Advisor to the CEO and was the Executive Director of the Bernard van Leer Foundation until May 2022. She joined the Foundation as Programme Director in 2016 and has over 20 years of experience managing social development policies and programmes. Before she joined the Foundation, Cecilia was the Coordinating Minister of Social Development of Ecuador from April 2013 to March 2016. She was responsible for policies in health, education, housing, sport and social welfare.

Over the years, she also held policy-making roles in various other Ecuadorian ministries — including the Ministry of Labour, the Ministry of Social Inclusion and the Ministry of Education — where she championed policies to improve the conditions of children, women and indigenous populations.

Amongst the most relevant policies she launched, it is important to highlight the cross-sectoral early childhood policy, bringing unpaid household workers into the social security system; eradicating child labour on rubbish dumps; and new laws on food labelling to help people make informed choices about their nutrition.

Beyond government, Cecilia has worked for civil society organisations such as CESTAS and Fundación Esquel, international organisations such as the Organization of American States and UNDP, and in academia: she was a part-time professor at the Pontifical Catholic University of Ecuador in Quito, and a Fellow on the Politics of Globalisation, Democratic Participation and Development Politics at Reed College in Portland, Oregon, USA.

Cecilia holds a masters degree in Social Policies for Sustainable Development from the University of Bologna, Italy, and a BA in International Relations from the Pontifical Catholic University in Ecuador. She holds an executive master’s degree in cities from the London School of Economics, an 18-month programme for professionals in the public, private and third sectors who want to understand and deliver change in urban areas.

A native Spanish speaker, Cecilia is fluent in English, Italian and French, and speaks basic Kichwa. Since 2002 she has been a volunteer for Ayuda Directa, an Italian NGO that develops projects for rural communities in Chimborazo and Cotopaxi provinces.

Cecilia is a passionate sportswoman. She has competed in events such as marathons and Ironman 70.3, founded a women’s cycling club, and scaled the highest peaks in Ecuador. 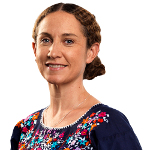